Come down to The Old Barn Community Centre for the 7th Annual Anthropological Film Festival! Hosted by The Ethnographic Film Unit @ UBC. Join us on Friday night for screenings of the festival winners and reception, and on Sunday to view selected films for the festival! Stay tuned for a full schedule to be announced next week!
All are invited - free food, lots of fun, and a great way to learn about global indigenous cultures. Posted by Charles Menzies at 8:56 PM No comments: Links to this post

Five years ago folks greeted the idea that I would run a marathon with polite disbelief.  Sometime during my 40s I started to say that I planned to run a marathon by my 50th year.   It was no idle goal: but it did feel rather insurmountable at the time.    I found lots of encouragement to maintain the status quo.  Things seemed okay so why bother changing? Our society makes the consumption of health destroying foods easy.  Our workplaces provide very little real opportunity to remain active.  For those of us who are parents we become so immersed in the fine details of parenting that we often neglect our own needs.  Yet, the idea remained alive.

Today I have the modest total of three full marathons (42.2km), 6 half marathons (21.1km), plus several 10km and 5km races. I set no Olympic records, but as a 50s decade runner I am not doing so bad accumulating personal bests as my training and strength continues to build. I run most every day, when I don’t I either bike, walk or swim. I’ve changed my food consumption too.  But this isn’t a story about my personal accomplishments, it’s tale about the capacity to set one’s sights on goals and achieve them.

I set out to make a change in my life, my health, and my behaviour.  I faced obstacles along the way. I encountered folks with good intentions, but a dim view of my goal.  “Don’t make a radical change,” I would be told, “you’ll just bounce back bigger and heavier.”  “Won’t running hurt your knees?” While the naysayers were distressing and even depressing, it was the support of my family, friends and colleagues who provided encouragement to keep going.

The same can be said about our community and the need for real, effective democracy.  The health of our community is at risk if we don’t make changes.  We can’t always rely upon the good graces of those with power.  It is important to take charge of our own lives and communities.  It isn’t easy.  The temptation is to focus on the short term and if things seem okay to ignore the important long term outcomes of our choices.  There are many people who want a healthy democratic community and those are the voices we need to listen to. Like taking the path to better personal health we start with changing small things and then move on to bigger more effective changes.

Through the UNA we have a modicum of representation.  We have an agreement with UBC that gives us access, for a fee, to amenities and certain on campus services.  That’s a good first step.  It’s time to step up to the next level of democratic change.

Today the UNA and UBC are stuck in the “lets walk 20 minutes each day and skip every other brownie” mode of democratic life change.  This period of stagnation arrives in all great transformations. We have hit a plateau. It’s hard to move to the next level of democratic activity, but it is not impossible.

These are two, simple, easy changes that would move us to a new level of democratic action in our relationship with UBC.  But why stop here?

Within the UNA we too should be making democratic changes.  We need to expand the role and strength of elected resident directors.  We need to move more our processes into the public domain – no more closed-door meetings!  Too many things that the UNA does is locked behind closed doors and in off the book meetings. That’s like sneaking a brownie when no one is looking!

Just as I managed to take control over my life to become a marathon runner so too can we become an active democratic community.  Of course it will be hard work.  But the rewards are real, achievable, and tangible.  On my blog, http://universitytown.blogspot.ca, I have outlined a series of short, medium, and longterm goals to achieve real democratic governance in our community.  I invite you to add your ideas as we work together to bring real democracy to our community in the university town.

[Originally published in the Campus Resident, March 18, 2014. Charles Menzies is a professor in the department of anthropology at UBC, a resident west of Blanca since 1996, and an elected UNA Director.  This is his opinion and does not represent the official position of the UNA in any way, shape, or form.

Posted by Charles Menzies at 5:48 PM No comments: Links to this post 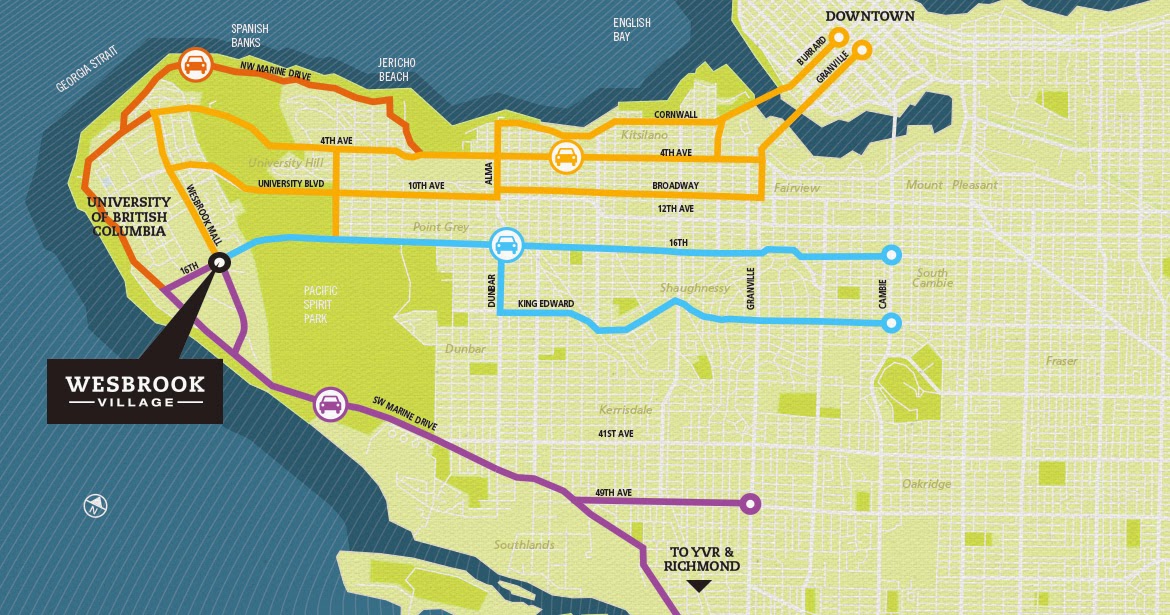 With all the good work UBC is doing to promote car-alternatives why does UBC's private development company, UBC Properties Trust, continue to advertise Wesbrook 'village' as a short car's drive from Richmond, Cambie Street and the Downtown?  Let's focus on biking and transit folks - but the graphic were the PR is.
Posted by Charles Menzies at 7:13 PM No comments: Links to this post

We had a presentation from the Norma Rose Point School PAC playground-fundraising committee regarding their planned fully accessible three unit playground at the new school site.  The new school, on the site of the old U Hill Highschool, is a K-8 school. The school will be one of the most modern and progressive facilities operated by the Vancouver School Board when it is opened this coming fall.  However, under the provincial regulations there is no funding for the playground!  Hard to believe, but that is true.  Just the same, the VSB has come up with a $50,000 contributions, the 150 parents currently attached to the school have raised $20,000, a few corporate sponsors have given modest donations.  Last night the UNA made a contribution of $12,500.  The overall play ground budget for the three required school playgrounds is, however about $300,000.  The play ground committee had asked for a contribution of $100,000. This is what the UNA contributed to the skateboard park that graces the ground new the arena and parkade on Thunderbird Blvd. I am not certain why our contribution was capped at $12,500.  It would seem that we can do better given the importance of an accessible playground, our past history supporting playgrounds not in our UNA area, and the fact that many of our children make up the population of Norma Rose Point School.  I intend to bring this forward to the Board again with the intent to increase our funding contribution to this important and worthy project.

The other outcomes of the meeting include:

The response to this question was deferred due to a matter that is not currently in the public domain.

The UNA Board meeting package is online and available for viewing.   Prior to each meeting I review the package and jot down a series of questions that I have about the materials in the package.  Starting with this meeting I will place my questions online for public viewing.

Each meeting there are a series of reports from external agencies  (Electoral Area A Director, the AMS, Campus & Community Planning), our UNA standing committees, the UNA Executive Administrator, and then staff reports related to specific agenda action items.


Posted by Charles Menzies at 9:31 AM No comments: Links to this post

Is it Time for Spending Limts on UNA Board of Directors Elections?

Using the guiding principles of equity in accessing members, the UNA will apply the following campaign spending limits:
Campaigning spending is limited to $500 per candidate.
Candidates may pool their campaign funds if they choose. However, the intention to pool funds must be declared in advance of a candidate’s first campaign expenditure irrespective of whether the candidate has submitted nomination papers.
Gifts of professional services and products (including, but not limited to, art and design, legal advice, printing, paper, webpage design, etc.) must be included in the campaign limit at full market value.
Volunteer canvassers and campaign support time are not considered an election expense.
A full financial report of all campaign expenditures, including itemized expenses and a list of campaign contributors stating whether they contributed cash, goods or professional services must be submitted within 45 days of the AGM. There will be full public disclosure of these financial documents.

What do you think?  Does it make sense to publicly disclose campaign spending and to place reasonable limits upon how much money candidates spend?

Posted by Charles Menzies at 12:46 PM No comments: Links to this post