I have know Charles for over a decade, since our families (along with ten others) became the first residents of Hawthorn Place.  I admire and appreciate the many things he has done to make our community better, through his leadership, his depth of knowledge, and his commitment to his neighbours.  I couldn’t be happier that he has decided to run for another term to represent us on the UNA Board.

I am interested in having the voices of Faculty and Staff renters on campus heard by the UNA and included in community decision making. For decades Charles Menzies has advocated strongly for all residents to be recognized as important contributors to the campus community. Having Charles as a UNA Director is important to keeping the UNA open and inclusive. He has my vote and I encourage everyone interested in building a strong, diverse, inclusive and sustainable campus community to support him as well.
Tara Ivanochko
UFASTA Chair
Director, Environmental Sciences
Teaching  and Learning Fellow, UBC Sustainability Initiative

Posted by Charles Menzies at 7:24 AM No comments:

Charles has lived with his family in the university town since 1996.  First renting from UBC Housing on Osoyoos Crescent, then from Village Gates Homes on Hawthorn Lane and finally joining the Logan Lane faculty-staff co-development project.  Charles has been a passionate participant in, and contributor to, the life of our shared community.  Charles is employed by UBC as a professor in the Department of Anthropology at UBC.
---------

During my term as Director and Secretary (2012-2014) I advocated for the establishment of a civic engagement committee, an editorial review board for the Campus Resident, and more effective and meaningful inclusion of residents in UBC decision making. I’ve done my best to respond to community concerns over parking, noise, and traffic. We’ve made a lot of progress.  There is, however, a lot more work to do to ensure resident voices are heard in UBC’s decision-making processes. I look forward to participating in the work that needs to be done.

I am optimistic that change is coming. UBC has taken some important first steps with their proposed engagement charter.  The UNA Board is currently in negotiations with UBC to improve the UBC/UNA management agreement.  I believe that expecting greater community control in matters that affect us is a reasonable expectation.  As residents we make a significant contribution to the UBC community and should, as a consequence, have a commensurate say in local affairs.  We need the capacity to have a real voice in decision making in planning issues that directly impact our community. My hope is that with your continued support our resident voice will be strengthened on campus.

There are changes closer to home that we should also be making.  The UNA has a growing staff and obligation to provide critical community services. The new Westbrook Place Community Centre will expand our staff and services several fold. Yet we have not conducted an effective public and systematic review of staffing and services for many years.  As Directors we have a responsibility to ensure that our services are provided in an efficient and fair manner. Our staff does a great job. However, if we continue to expect more of them without having a clear vision and plan we will undermine their capacity to provide core services.  If re-elected my first order of business will be to ensure we have a full and transparent administrative review of staffing, services, and communications.  I believe that the UNA board needs to spend at least as much time ensuring that the UNA is properly and efficiently managed as the Board does seeking concessions from UBC.

The UNA and the university town is a great community.  It’s been a wonderful place for my partner and I to raise our family.  As an elected UNA Director I believe that I have an obligation to ensure that my colleagues and I do the best we can to keep what works in the UNA and to strive to make things even better.

I trust that I can count on your vote in this election.

I'll also be  voting for Alan Craigie.  Alan, a newcomer to the UNA, is a longtime resident and committed community member who will represent a community of residents who have been increasingly silenced in the running of the UNA - faculty and staff who rent from UBCPT.

We need to ensure that ALL voices, not a select few, are heard and represented on the UNA Board.  Voting for Alan will go a long way toward bringing in a currently silenced voice in our community.

Posted by Charles Menzies at 10:50 PM No comments: 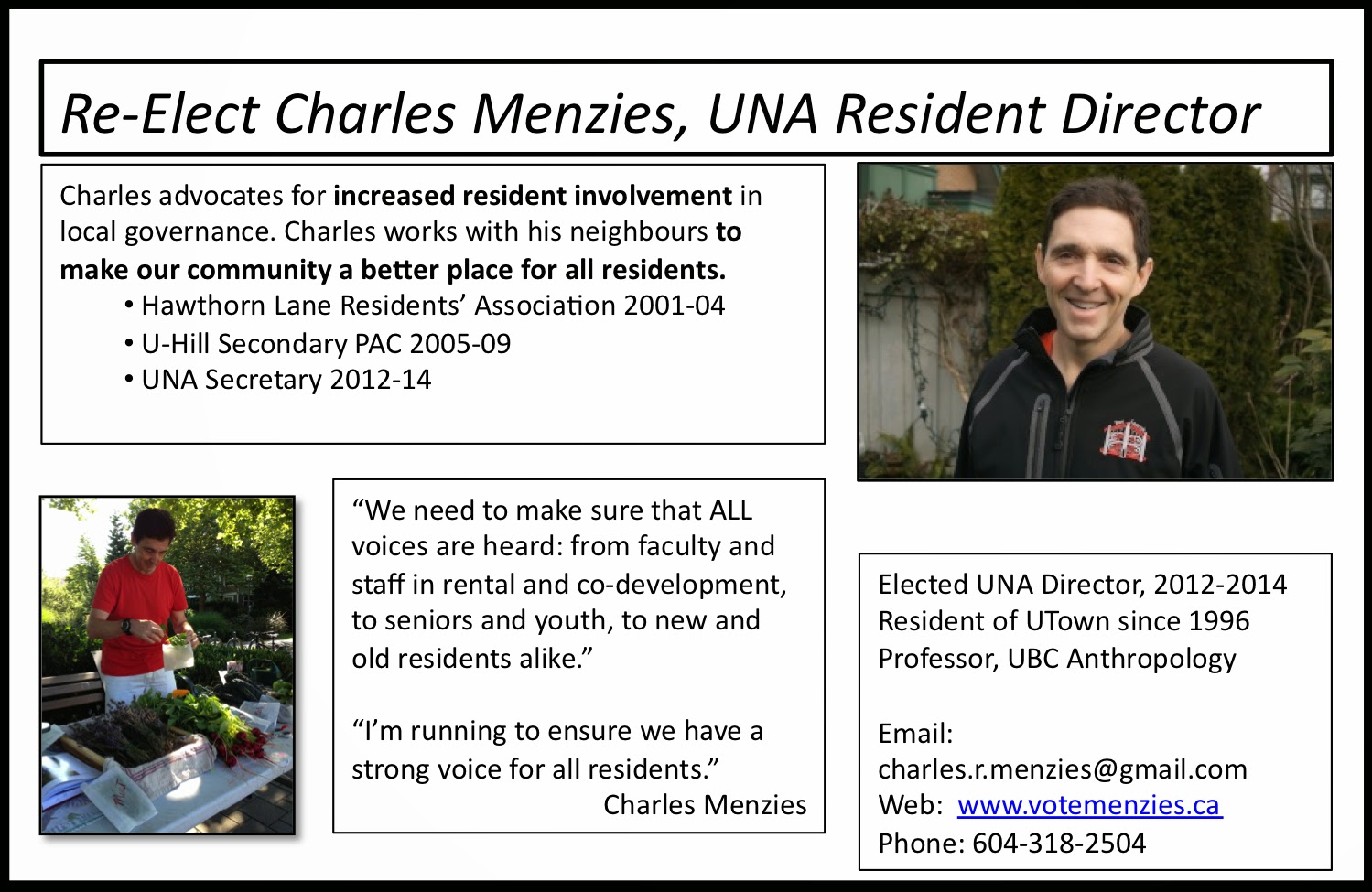 Posted by Charles Menzies at 1:55 PM No comments:

Norma Rose Point (Rose to those who knew her) was a diminutive person who had a big impact on the lives of many people.  I was fortunate to meet Rose late in her life through my work at UBC.  Rose was an education advocate for all people irrespective of creed or colour.  She was an impressive person whose life’s work was focused on educational issues.  That’s a little bit about why her name is so right as the name of the new school in our community.
Ten years ago the rapid housing development at UBC had created a near educational crisis of overcrowding.  Provincial government regulations made the matter worse by requiring school districts to close all ‘surplus’ school spaces before rebuilding old schools or building new schools.  For a school district like Vancouver this was a serious problem.  Some parts of the district, mostly in the north and east, had large nearly empty schools.  However, areas like the University Town, Yaletown, or the South Fraser had overcrowded old schools unable to meet the needs of our students.  Every time we, as parents and community members, spoke with school officials, UBC Developers, or provincial officials they commiserated with our concerns and then said there was nothing they could do; it was somebody else’s problem.  But that wasn’t good enough and we persisted.
Getting our new schools – the relocated and rebuilt University Hill Secondary and the new Norma Rose Point School- was a community effort.  There was no one person or single group who can fairly claim reasonability.  At both the elementary and secondary schools the Parents’ Advisory Councils lobbied hard.  We sent delegation after delegation to the school board meetings.  We met with provincial and university officials.  The University Neighbourhoods Association, under the chairmanship of Jim Taylor, set up a Schools Action Committee where community members worked with parents and university staff to push forward the timetable for new schools.
Behind the scenes the school board, under the leadership of Patti Bacchus, started to work toward a solution that would allow Vancouver School District to build a new school without shutting down under utilized schools in more impoverished areas of Vancouver. UBC helped out by providing access to the decommissioned National Research Council of Canada building on 16th Avenue. Constant parent and community pressure kept the issue in focus.
By the time my son graduated from U Hill Secondary in 2009 the secondary school was about 250 students overcapacity at an enrollment of 550. At the same time several hundred elementary students had to be bussed out community to schools several miles distant.  The new 800-student high school was opened in January of 2013 and the new Norma Rose Point School is set to open this September. All together our three area schools should just be able to accommodate all of our community’s students. It took a decade of community engagement, but the end results show that a community committed to positive growth can effect real change and improvements.  Thank you to all the people who, over a decade and more, volunteered and campaigned to make sure we can celebrate the grand opening of the Norma Rose Point School!
Posted by Charles Menzies at 1:54 PM No comments: