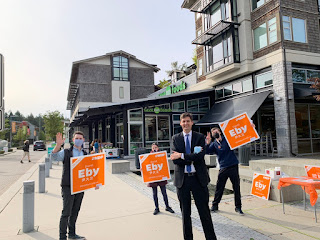 One thing about living about living on campus is that it's not uncommon to run into one's local MLA. Gordon Campbell used to live down the block from me. I don't think Christy Clark was ever informally on campus. David Eby, even as Attorney General, is often out and about by himself or with his family.  It shows his connection and interest in the riding. I suspect it also reflects the material reality of living on campus.

This time David wasn't just out and about - he was on the campaign trail. While engaged in some household provisioning I had my chance to say hello to David while he was soliciting votes. I waited for an elder who was talking with him and then took my turn to say hello.

I've followed David's political career from around the time he tried to get a Vision nomination for city councillor. He failed (good thing for us in Van Pt Grey I say!). His work with the Pivot Legal Society made a mark on my memory. There are a lot of lawyers in politics, but few have worked with groups like Pivot. The type of politicians we get shows it.  I also had a chance to go to one of those little coffee meetings political party organizers like to set up - small, intimate gatherings to get a chance to know the candidate (maybe get some donations too).  A fellow parent activist from the early Gordon Campbell 'destroys public education' era invited me (thinking I might be interested - I was). In my roles at UBC (as a director of the UNA, 2012-2016; and Board of Governors, 2017-2020, among others) I have also had the chance to see David in action as MLA. I was impressed at the start and remain so to this day.  I'm less sanguine about the NDP.

I've had a mixed relationship with the NDP. As a teenager in the '70s I door knocked for MLA Graham Lea. In the '80s I conceived of the NDP as the left wing of the ruling class (but nonetheless continued voting for them). In the 90s I slacked off the critique as they were the only show on the road - even served as a constituency executive in Van South and Pt Grey. By the 2000s it was clear that while flawed they were better than the anachronistically named provincial Liberal Party. I'd just about come to terms with their flaws. Then the police actions against the Wet'suwet'en land healers began last January.

A group of students, some affiliated to UBC, occupied Eby's office on January 28, 2020 in a show of support for the Wet'suwet'en land healers. Before the occupation had really started the police were called and several students were arrested.  I had only just purchased an NDP membership and had been in the process of reaching out to the local constituency office to see how I could get more involved.  But that act by the NDP, clearly supported by David Eby, was an act of overt and unnecessary aggression. When faced with a similar occupation and huger strike at UBC, President Ono and members of his executive reached out to the students, visited them, offered moral support, but didn't call in the police. I've seen right wing politicians in BC have greater tolerance of having their offices occupied then did Eby's staff.  But that action reflected and reinforced the action the NDP were taking with regard Indigenous rights and title versus industrial development in BC. It was one of those moments in a life when we make changes and that action led me to revoking my new membership in the NDP.

So here I am on a sunny Monday afternoon speaking with David Eby in Wesbrook Village on campus. We know each other, we are cordial. I say how much I appreciate the work he does individually as an MLA. I say that I will be voting for him. But then I pause. He is thanking me for my support. I don't really support you and the NDP at this time. I feel compelled to explain that while I am voting for him, it is not becuase I can honestly agree with or support the party he represents. I can see him stiffen up a bit. I can sense the slight defensiveness. I try to shift a bit to the positive, but then get drawn back to the way the COVID-19 plan is causing stress and mayhem for teachers that I know.  He suggests it will be to their detriment if they stay home or vote for someone other than the NDP. I'm inclined to agree, but I don't share that thought with him. We stand there silent for the moment. He glances at his watch. I wonder why one feels compelled to share our disagreements with our elected politicians.  I thank him for his time and say again how much I have appreciated his work as an MLA and say my goodbyes.

As I walk home across the UBC athletic fields I wonder about that desire we have to tell our politicians what we think of them and their work. I've had similar experiences running for local level political office where people will say they're voting for me but then explain the particulars of where I've gotten things wrong. I'm not thinking about that nasty online stuff where people act like verbal hooligans.  That is something totally different.  I mean like the elder who was speaking to David before me. Or my own need to say that just because I was voting for him didn't mean I actually was supporting him and his party. I suspect there are a good many among us who have found themselves in that kind of situation - meeting a politician of some sort, being pleased to meet them, and saying hello, and then adding in that extra share on how we think they could do better.

There's a part of me that rather wishes I'd simply said to David, "nice to see you. You can count on my vote" and then left it at that.  Yet, and maybe this is the point, that simple sentiment feels dishonest to me. Yes I am voting for David (and would urge all of you to do the same), but I'm not doing it wholeheartedly. I am doing it with reservation. Even though the final vote tally won't be broken down into 'really loved the guy,' 'lukewarm,' 'hates his guts but voted for him anyway,' and thus it matters little why we came to our final decision, there is still something in all of us I think that feels it important to explain our misgivings and conditions; even if they don't matter at the final count.

So in this election I'll be voting for David Eby, reservations and all.

Posted by Charles Menzies at 2:10 PM

Thank you for sharing Charles. I respect you for being willing to both offer David your support and tell him that there are issues where you don't see eye to eye with his actions or those of the NDP. Elected officials are supposed to represent us. If we don't give them both sides they can't really do their job.